All Collections
POPin Creator Guides
Best Practices
Why should I participate in my own POPin?

Why should I participate in my own POPin?

As the POPin Creator, be active in your POPin to drive participation.

Written by POPin
Updated over a week ago

POPin gives leaders the power to have an anonymous, two-way conversation with any size team. We highly recommend getting involved in your POPin to successfully leverage this power and build trust with users. Get involved by:

Have you ever been the first person to show up for a party? That's the same discomfort users often experience when they're first to join a POPin. We recommend seeding one or two responses into your POPin session to get ideas flowing; once users see activity, they're far more likely to add a vote or comment, and even their own response. Pre-seeding is also a great way to test your own ideas. If your idea gets voted on as the "best", it becomes the group's idea and reaffirms your thinking.

As the POPin Creator, only you have the ability to respond to comments using your name. Use this feature to show users you're listening by responding to top responses in your POPin; you can ask for further clarification, respond to a question, or even offer kudos. Here's how:

Select "Comment as [your name]" from the dropdown that appears.

Leave a named comment for your users to engage with. 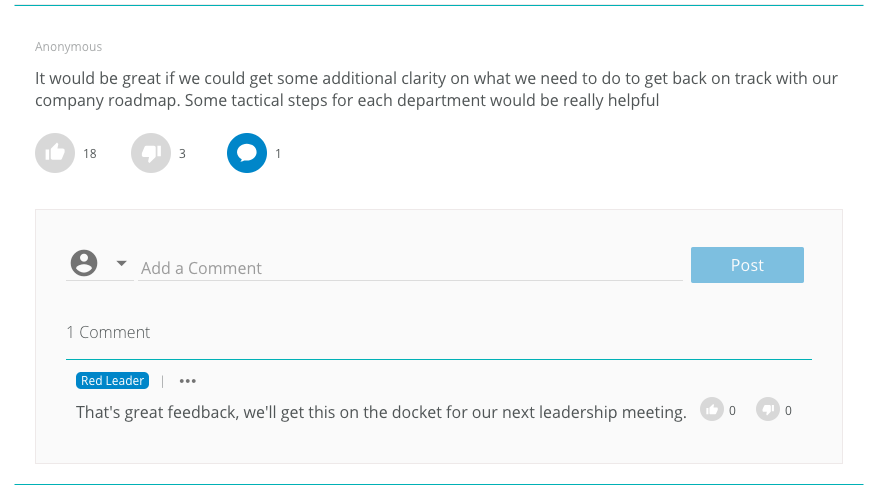 Make sure to mention in the reminder communication you send your team that you've replied in the POPin! This goes a long way to drive continued engagement with your users.

There are lots of strategies to encourage greater participation in your POPin (read more), but actively participating is one we have found to be extremely effective!

Did this answer your question?